Day 5 written by Tessa and Charlotte...

After a short ride in the bus dancing to Ethiopian music we arrived at the school for Day 5. We kicked off the day with a delicious breakfast of scrambled eggs, Ethiopian bananas and bread, cooked by Hamle 19's own staff. This meal was accompanied by one of the more confident boys dancing to Gangam Style by Psy, despite being about 4 years old!

The group then split into those entertaining the children and those on the building site, as normal.
Games with the children included "cous cous" which is somewhat similar to duck duck goose, and very popular among the kids. We also sang the Hokey Pokey as normal, except the children started to freestyle dance and got a bit excited! Finally we played a huge game of inflatable football, which was a good excuse for most of us to embarrass ourselves and kick the empty air, which the locals found endlessly amusing.

Meanwhile, on the building site, the girls were moving soil in order to create a space for a pavement around our new classroom. This was exhausting work, and a few more water breaks were taken than usual! We kept having to ease the tools out of the keen hands of some 8 year olds, who were very eager to help! Girls were also busy on chiselling away cement so that plaster would stick to the walls. When the groups swapped over duties, we pulled out a cricket bat and ball for the kids to experience an English traditional game. 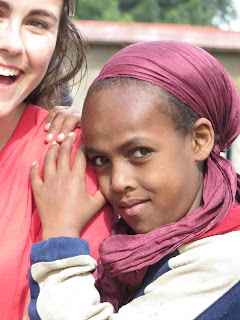 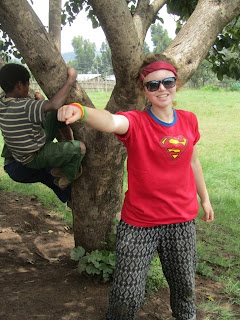 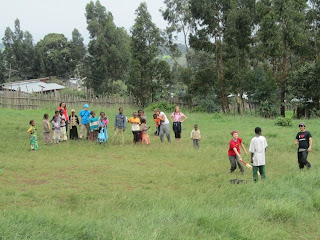 Then a well earned lunchtime! This consisted of bread, with a selection of lentil and chickpea dishes, although some of the girls were still recovering from the chilli contest the night before which left their mouths still burning. The whole day was sunny and warm so more sun cream was applied before heading back out for more hard work.

After lunch, we divided into 3 groups, one on the building site continuing cement work, one in the classroom with some excited kids for drawing on t-shirts with fabric pens, and the last on the field playing yet another game of the famous "cous cous." On the building site, we started to paint the mural on the outside of the classroom before the heavens threatened to open. 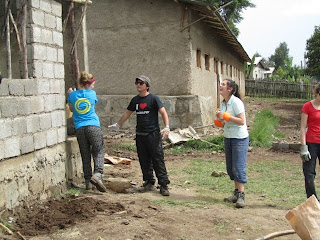 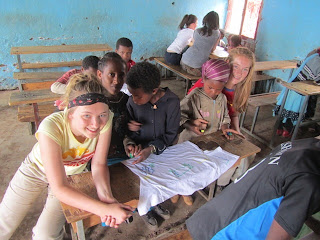 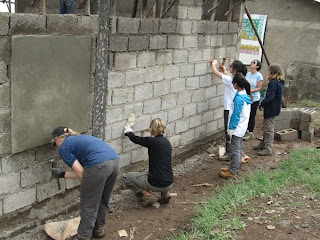 All in all, a very enjoyable day and we're all sad that tomorrow is the last day in Assela.

By Tessa and Charlotte
Posted by Inspire Worldwide at 11:43